Another game last week (which was played by a new community member (helped by myself) in one side and Oliver - Hida Tomaru -, Buke Daimyo). Thanks to Club Comandante for letting us play there.

We played the Supply Line scenario with 400 army points armies and it was really fun. The battle was good for the Samurai from the beginning, in the second turn there was already two caravans burned down. But some heroic actions on the sohei side and some good strategic decisions made the third caravan leave the table against the odds. The buke won anyway, but it was a really fun game and our brains were really due the activation system (who did it?

) there was sooooo many decisions to take and it was easy to destroy your own strategy.

(sorry for the pictures quality.. I should fix it) 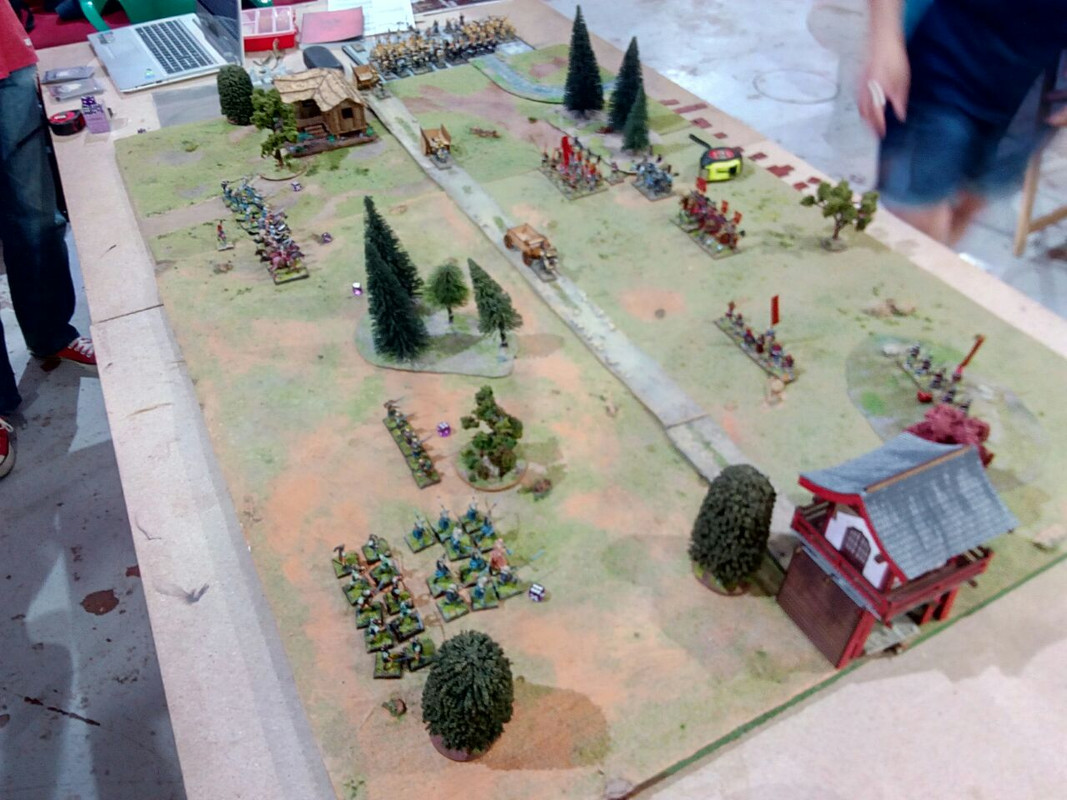 Deploy. Sohei left and Buke right. The caravans must cross the table moving 15 cm + 3D6 at the beginning of each turn. 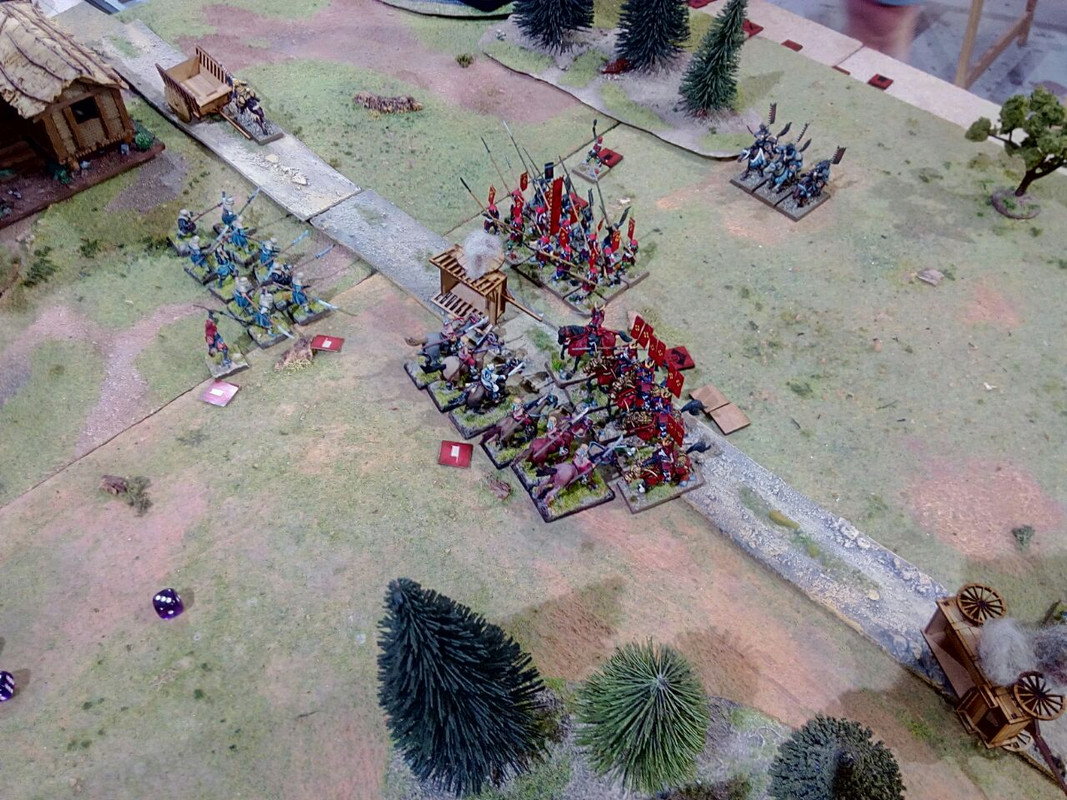 The Buke general used a special command order which allowed him perform an extra move during the deployment. Thanks to that in the first turn two of his units could move and burn down two caravans. The sohei run trying reach the close combat and stopped the rest of the units. The Ama Kihei (sohei elite cavalry) calculated wrongly and they put themselves in range for the heavy cavalry Buke O-ban charge. And so did them and almost destroyed the sohei cavalry and killed the hero which was leading the unit. This cavalry was the elite of the army so the center of the sohei army was very compromised.

The O-Ban cavalry showed why they have the "Terror" ability. So tough when charging! 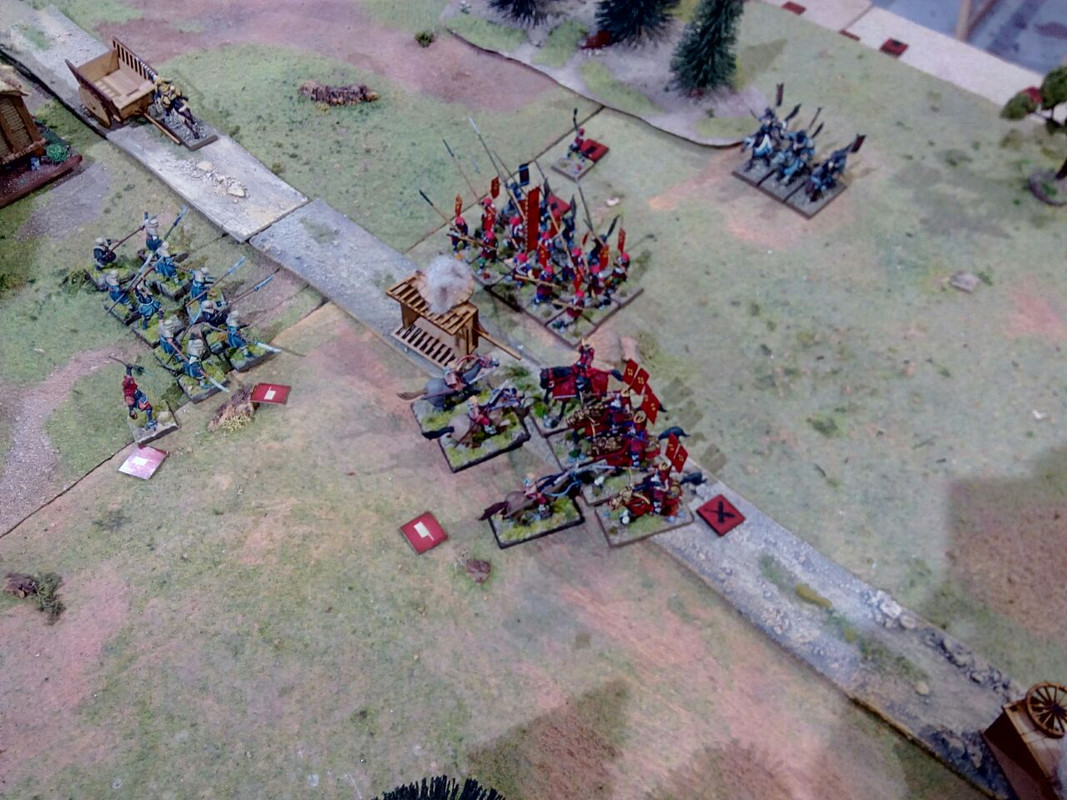 The charge was brutal, killed the hero and decimated the unit, but those nuns stood in close combat. 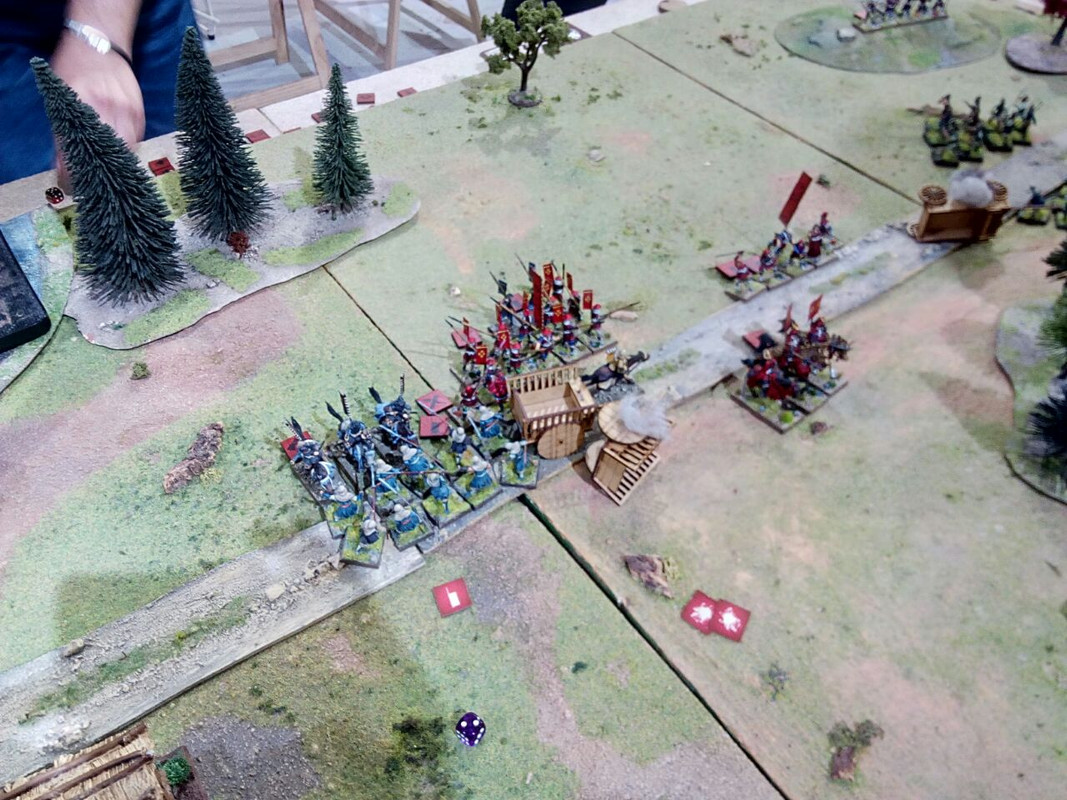 The third caravan move just in front of the ashigaru buke unit, they did not have even to move. The sohei player got the initiative thanks to a command duel and the hero sohei general jumped over the caravan in order to put himself in front of the unit, engaging them in hand to hand combat (paying with his life). This way the ashigaru could not move this turn and the caravan would be abler to move again (cavalry cannot interact with mission objectives). The monk unit move forward and stood against a the second cavalry buke unit. 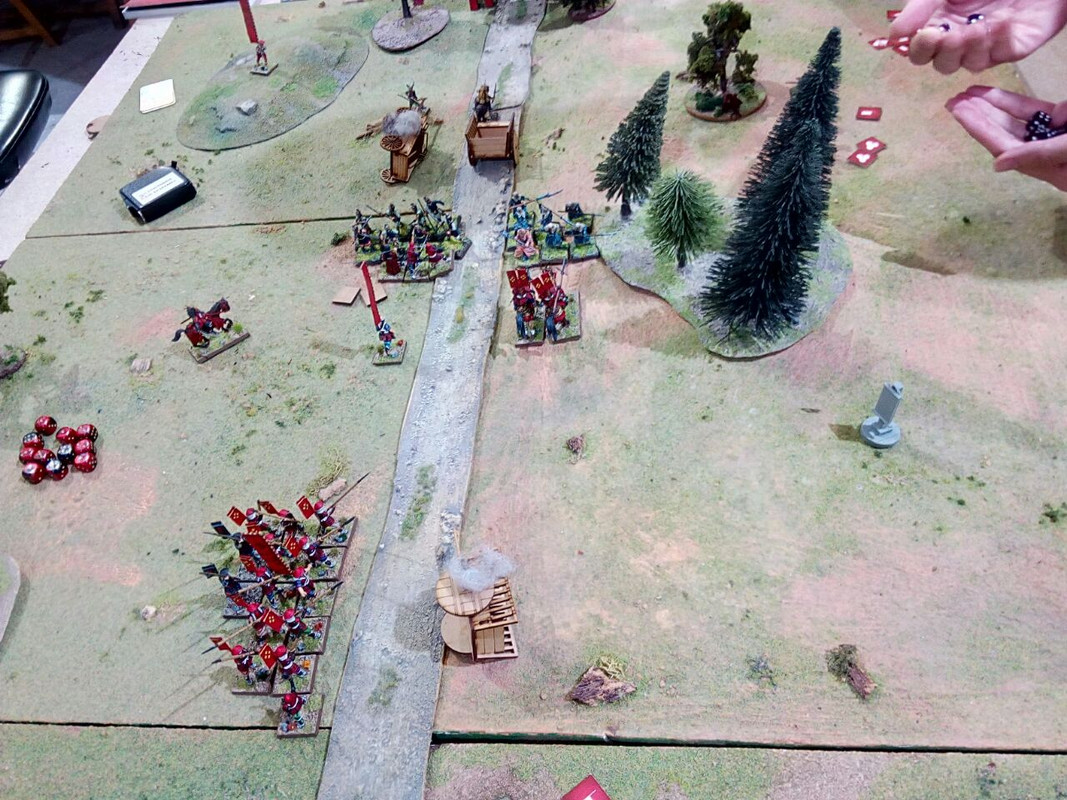 In the right flank the buke were taking positions to wait for the caravan, but they commit a mistake when did not blocked the road. Two sohei units moved up to the border of the path forming a near corridor to let the caravan cross them. 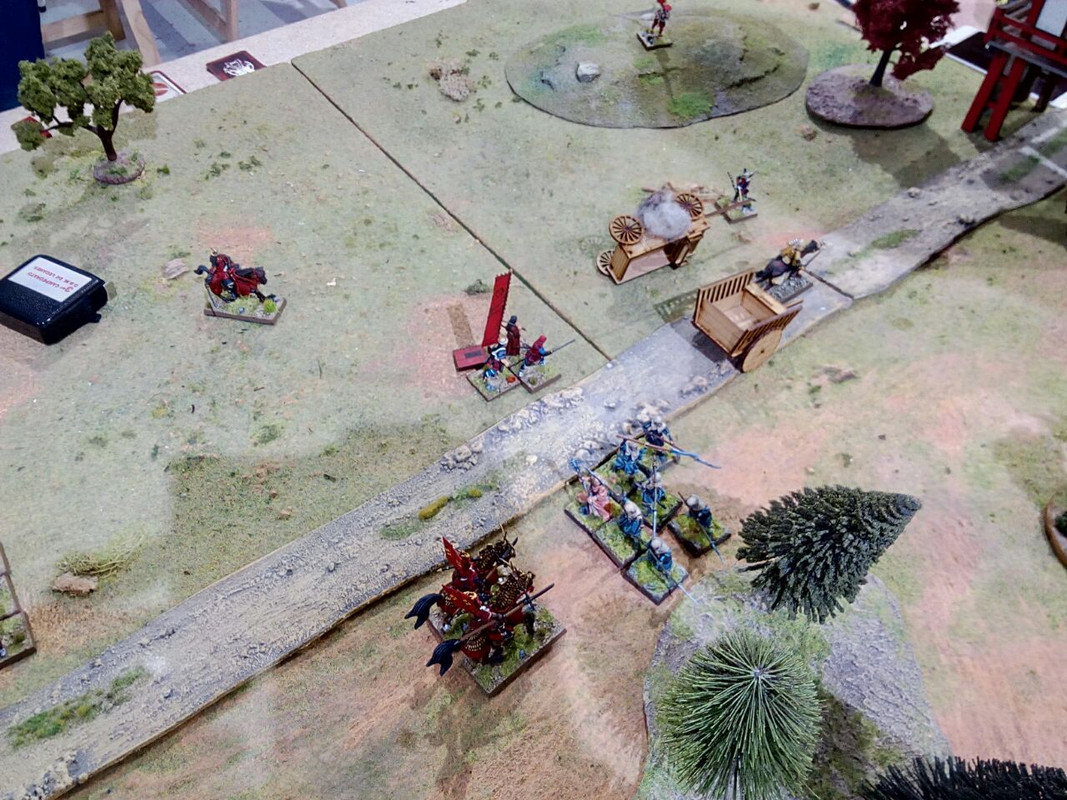 And so it did, but the hungry samurai charged against the heishi sohei and destroyed the whole unit in just one charge, although they received several casualties.

There was an archer ashigaru buke unit in the buke's left flank. After commit several casualties in the monk unit in previous turns, they moved to assault the caravan, but a sohei teppo unit, which have had nothing until this time, killed most of the unit. Surprisingly, the ashigaru did not flee and it has an opportunity to stop the caravan. 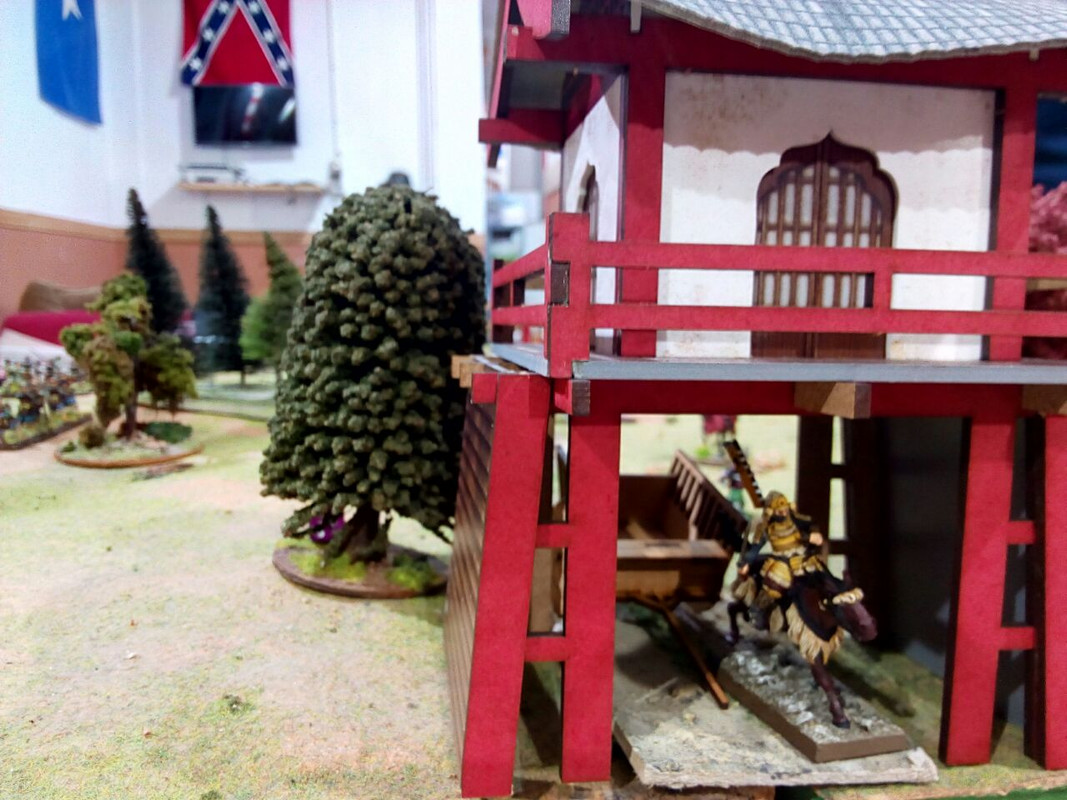 But he did not and the caravan left the table in the 5 (and last) turn. 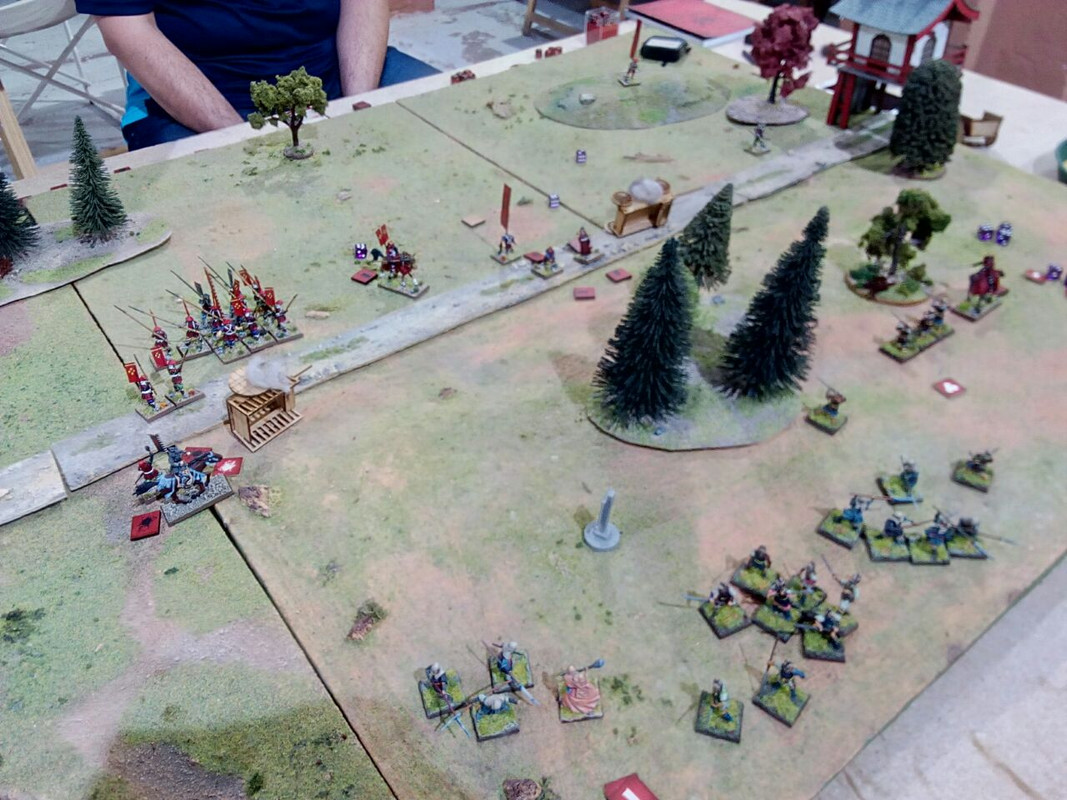 This is the end. One caravan scaped but other two were burned, Buke won widely. He also has a secondary mission (kept in secret until the end) of kill as many heroes as possible, and he killed a lot.

Both sides suffered many casualties but the sohei army was almost destroyed. The Buke army is soooo strong thanks to their armour. Definitely I have to add as many ranged combat units as possible.

This game had a lot of fun and many many strategical decisions. Many things happened during the game (that sohei hero stopping an the ashigaru yari unit was quite epic). We did many things good and wrong, and that is what is so interesting of these miniature wargames.

hope you enjoy it!
Top