Kyojin : The Giant from the Edge of the World 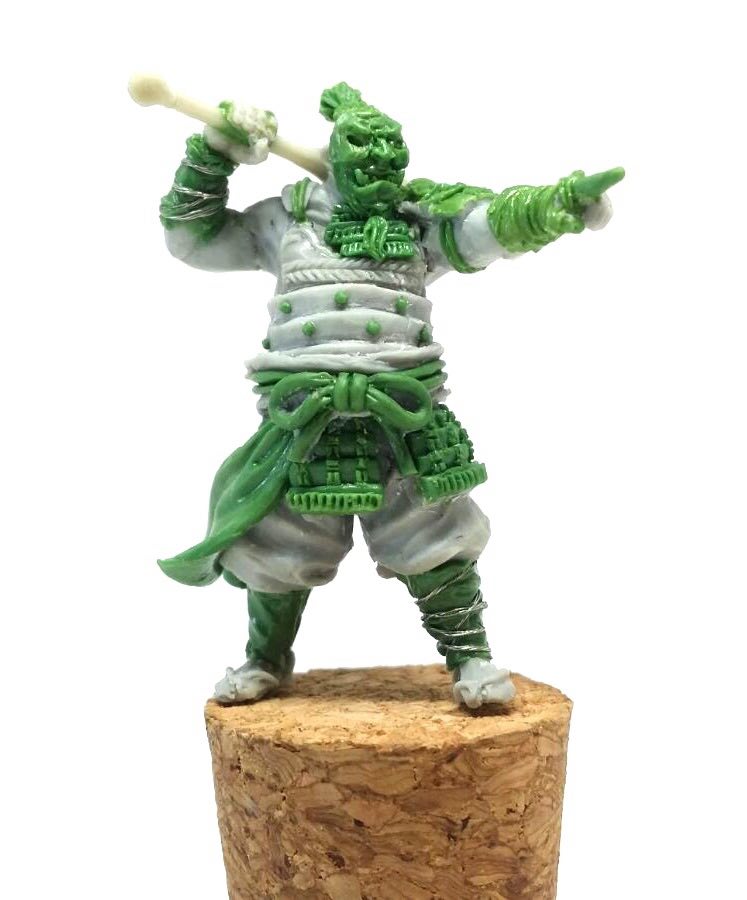 Background
“Ariki Rangi”, Kyojin repeated to himself while he peeked at the infinite sea horizon from the highs of the cliffs in the Uru province. That was the only word that he remembered from his native tongue. He tried and tried to remember how his life was before "the tragedy" but only was capable of picturing his father's head: a full tattooed face giant, owner of a great war mace, called Ariki Rangi.

Kyojin only remembered sensations, the warm sand, the salty taste of the sea, the odour of fresh fish. But, inevitably, he always reached at the same point, when the Wako landed on his home. Although the Wako was more smaller and weaker, they were many and were able to slaughter that village of giant people. They killed all the adults and kidnaped all the infants.

From that day on his life was a nightmare. There were dozens of children captives in those hideous ships. Half of the time they were forced to clean the boats, setting up robes and fighting themselves while the Wako bet against which children would pass out the first, all laughs and swearings. The other part of the time the children were forced to eat. Very soon Kyojin discovered that the Wako plan was to make them as big and powerful like their fathers and so use them in combat. The children were called Gurosu. They were called alike, they only were expendables soldiers used for the heaviest jobs and fear their enemies.

When Kyoujin left the childhood, he was the bigger one, no Wako reached his chest and his arms were as broad as the torso of those weak pirates. When he took conscience of his own size and strength he planned his freedom. Only half dozen of Gurosu made team with him, the rest thought the Wako would kill them and it was worthwhile eat everyday than dead escaping from the pirates.

A summer night when the Wako ship was closer the coasts of Momiji, Kyojin decided it was time. He and his partners broke their chains and went on deck in order to jump to the sea and swimming to freedom. When three of the Gurosu had already jumped over the ship's rail, Kyojin heard a groan. He turned around and saw the captain of the Wako, one of the Turgot's Umi no Akuma, casting his sword in one of Kyojin's brothers. He was paralyzed, the demonic mask that occluded the Umi no Akuma's face was terrifying, only illuminated by a dim light while a horrific laughing raised from it. Kyojin's saw his brother kneel with his chest plenty of blood and fell to the ground. Then, he remembered his father, proud warrior, dead over the sand by the Wako hands and something clouded his mind, a great cry was raised at same time he charged against the captain.

One hour later, Kyojin reached the coast by swimming. In his right hand grab the Umi no Akuma's Head, took the mask and used for himself. He had have terrified by that face, now he will wear it and his enemies will feel the same terror. The rest of the Wako's body would feed the fishes.

He gathered with his brothers, which were found laughing and enjoyining his freedom over the sand. Few time after the started their journey with no destination until they found a small Otokodate city...

The rest is history. The Otokodate, when they saw half dozen of giants come into their city, got shocked. They received and feed them as they were sent by the gods, strong men which would help the Otokodate to defend against the Kuge and Buke clans. The otokodate ronin took them as students and they trained year after year until become excellent warriors. The Giant Ronins were friendly called. They chose enormous tetsubo as favourite weapons and proper armour and kabuto to their big body and head were made.

At the end of their teenage year, these Giant Ronin were able to smash a samurai only with their hands. The otokodate named him Kyojin (Giant) and was ranked as the captain of their brothers. All together are known as Umi no Ikari (the sea's fury) and have fought in innumerable battles until become legends...

The Ronin title allows to any troop to swap from close formation to open (skirmishers) formation at the beginning of troop's activation, getting all bonuses derived from the selected formation.

A ronin troop apply +1D6 to its Combat Roll against a Samurai Title Troop.